We developped probabilistic models to encode the appearance of objects, and inference methods to perform detection (localization) and pose estimation of those object in 2D images of cluttered scenes. We started with 3D, CAD-style models (Teney et al. 2011), then focused on appearance-based models (Teney et al. 2012). Those are trained using 2D example images alone, the goal being here to leverage, to a maximum, the information conveyed by 2D images alone, without resorting to stereo or other 3D sensing techniques. Our models are applicable both to specific object instances or to object categories or classes (Teney et al. 2013). The appearance is modeled as a distributions of low-level, fine-grained image features. The strength of the approach is its straightforward formulation, applicable to virtually any type of image feature. Appearance is represented by probability distributions of image features, for example points along image edges, or intensity gradients extracted densely over the image.

Such models of appearance have been applied to the tasks of object detection and localization, object recognition, and pose classification, by matching the test view with one of several trained viewpoints of the object. A notable advantage of the proposed model is its ability to use dense gradients directly (extracted over the whole images), versus relying on hand-crafted image descriptors. Using gradients extracted at coarse scales allows using shading, as well as homogeneous surfaces to recognize objects, when edges alone are ambiguous. 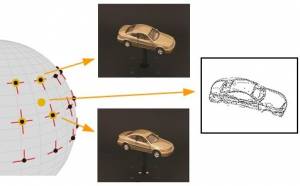 We also proposed extensions of this generative model to perform continuous pose estimation, by explicitly interpolating appearance between trained viewpoints. This makes it one of the rare methods capable of doing appearance-based continuous pose estimation at category level, this capability being usually reserved to methods based on 3D CAD models of objects, and limited to specific object instances.

We found an interesting application of those models and methods in the recognition (and pose estimation) of a robotic arm in 2D images (Teney et al. 2013b). This task is very challenging due to the smooth and untextured appearance of the robot arm considered (a Kuka LWR).