Our visual model is a generative object representation which allows for 6D pose estimation in stereo views of cluttered scenes (Detry 2009). We model the geometry and appearance of object edges. Our model encodes the spatial distribution of short segments of object edges with with one or more density functions defined on the space of three–degree-of-freedom (3DOF) positions and 2DOF orientations. Evidence for these short segments is extracted from stereo imagery with a sparse-stereo edge reconstruction method (Krüger et.al. 20041)); evidence is turned into edge densities through kernel methods. 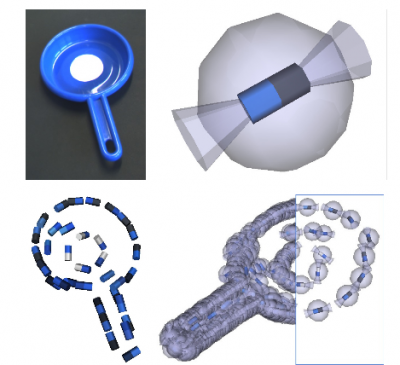